The NURVV Run Insoles are a pair of smart gadgets that accurately track your jogging sessions to help improve your performance.

If you are a frequent runner, you know that practice makes perfect. However, how do you know what you need to improve if you have no data about your performance?

For this reason, and many more, you need to use NURVV Run Insoles.

These smart wearable insoles use biomechanics sensor technology to measure the quality of every step you take. At the end of each run, they provide you with pinpoint statistics of your workout. This way, you have a better idea of what your strengths are. Also, you find out what you need to improve to get rid of your weaknesses.

We tried the NURVV Run Insoles for a week, and their performance surprised us. You can read more about these ground-breaking gadgets below!

Behind the NURVV Run Insoles is a team of experts in tracking and collecting sports data from runners. They believe that the most accurate results from a running session come from the feet and not the hands. As a result, they recommend using foot wearables instead of hand gadgets to measure your jogging performance.

The NURVV Run Insoles function similarly to any fitness tracker you would wear on your hand. However, you strap these ones to your shoes. From there on, you pair them up with your phone through the NURVV Run App, and you are all set to go.

These ultra-light insoles have a slick design and a powerful grip on your shoes. They weigh only 0.8 oz. each. Still, they are unlikely to fall off while you run. Also, they are resistant to water and mud. So, you can use NURVV Run Insoles in any weather conditions and on all types of terrains.

Each NURVV insole consists of a GPS Tracker Unit and no less than 32 high-precision sensors. They impressively capture data at a rate of 1,000 metrics per second. So, as you run, the insoles monitor all your movements and send the collected data in real-time to the app.

At any time during your run, you can check crucial information regarding your performance, such as: 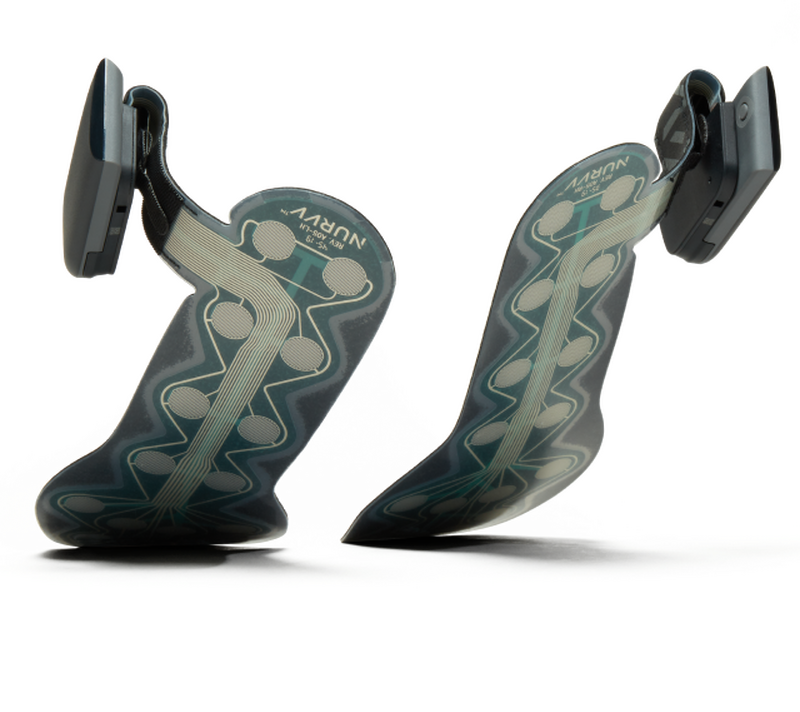 At the end of the run, you can easily evaluate your performance. Furthermore, the app gives you bespoke tips and exercises to improve your technique and performance. Lastly, the NURVV app also tells you how to change your running style to avoid injuries and muscle strains.

NURVV Run Insoles work just as well indoors as they do outdoors. So, we tried them both at the gym and on a run in the park, and they performed better than expected.

The most impressive part of these smart insoles was the live coaching feature. With accurate statistics and proper guidance, we experienced a whole new level of jogging.

Basically, the gadget lets you know when to speed up or slow down. This way, you can adjust your pace to the terrain and spend the right amount of energy throughout your run.

Another important feature of the NURVV Run Insoles is their cadence tracking. Through the app, you get an exact notion of how to step when running so you don’t risk injuries or tire too easily.

The only downside is that the battery life is not as long as the manufacturer claims. Instead of lasting for five hours, it went flat after only three hours and a half. So, you should consider this aspect if you prefer long runs that stretch well beyond four hours.

The NURVV Run Coaching App is free to download, and it works with both Android and iOS-running devices. You can easily install it on your smartphone and get accurate data about your running performance.

PROS:
They track your running performance each step of the way.
They are ultra-light and fit perfectly on most running shoes.
The live coaching app guides you on how to run more and better.
They work with both iOS and Android smartphones.
They are resistant to water and mud.
CONS:
The battery life lasts for less than four hours.
They don’t strap as well on other footwear as they do on running shoes.